Listening to the B of the Bang

When people talk about the anechoic chamber at University of Salford the focus is usually on how quiet the place is, and how the only things you can hear are sounds made from within your own body. But to many visitors the most immediate effect is how voices take on a claustrophobic character. Often visitors will say it sounds like they’re in an aircraft and their ears need to pop, or that everything sounds very muffled. You don’t get this effect if you hear silence outside, say in a desert. 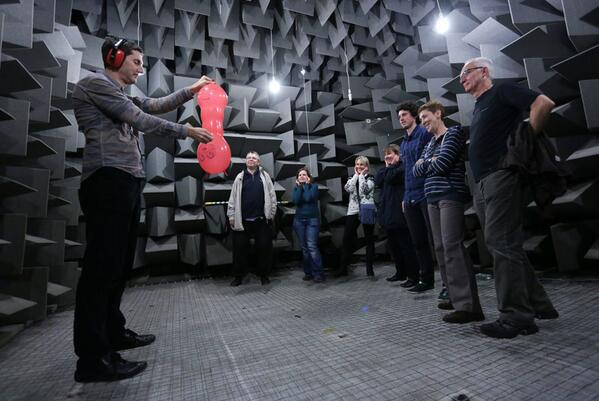 You might need to play it a couple of times to hear it. Yes, that short clicking sound is a balloon bursting. What about something even louder? This is the starting pistol we normally use for measuring large concert halls.

I’ve never been so impressed by two such underwhelming sound effects!Because there are no reflections from the walls, floor and ceiling of the anechoic chamber, all you hear is the short sharp initial sound with none of the embellishment a gun shot or balloon burst gets from room. It’s like hearing just the B from the Bang.

But why do people in an anechoic chamber listeners think their ears needs to pop? My best guess is that this happens because through their eyes visitors are seeing a room, but through their ears they aren’t hearing any reflections. Someone talking in the anechoic chamber sounds quieter than we expect because of the lack of any room reinforcement. Like the balloon and gun shot voices sound muffled. One common situation where we get a mild loss of hearing is up on a plane where the pressure in the middle ear exceeds the pressure outside. This can cause the ear drum to vibrate less and our hearing abilities to be reduced.

Do you have any other suggestions for things I can measure to show off the acoustic of the anechoic chamber? Please comment below.

16 responses to “Listening to the B of the Bang”