What is new in the third edition? 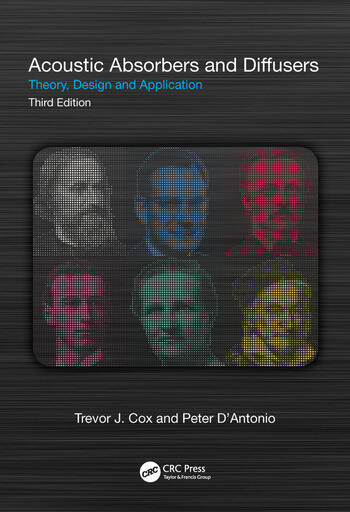 A new edition of my and Peter D’Antonio’s text Acoustic Absorbers and Diffusers is now out. For those wondering what is new and whether it is worth getting the latest edition, here are some of the improvements we’ve made to reflect how the field has changed over the last decade.

We’ve been through and brought up to date some of the old models. One example from the porous absorber chapter is that the semi-phenomenological technique is now the JCAL model. Another example from reflection modelling is that the FDTD modelling has been radically rewritten because of a number of developments in the field, for example bringing in a non-leapfrog scheme that most people now use. There is also a new prediction technique for diffusers. This is a time-based Kirchhoff solution that will be more accurate than a geometric model and considerably faster than FDTD and BEM (although less accurate).

All the old models are still there, but another change is we’ve published MATLAB scripts for quite a few of these. This should make it easier for readers to exploit the formulations in the book. For the more complex models, such as BEM, we’ve given information on open source implementations.

Quite a few measurement standards have been updated since the second edition, and so we have brought the book up-to-date to reflect changes. None of these substantially change the principles behind the methods, but of course if you’re working to a standard, you need to be following the current protocol.

I hope readers will also benefit from the rewriting of all chapters to make them even clearer. The chapter on the measurement of reflections is a good example. The last two editions were written as standards were being developed and consequently were naturally circumspect about aspects. Now a few years later, it is possible to write a more coherent story that hopefully readers will find even easier to comprehend.

Another nice addition is that the Appendices now have a collation of measured scattering and diffusion coefficients from the literature. We’re used to having similar tables for absorption coefficients, so we’ve now done the same for reflectors and diffusers.

Elsewhere you’ll find plenty of new examples of green materials such as green wall systems. Previous information on tree belts, natural fibres in porous absorbents and other means of natural noise control, have been brought up-to-date to reflect the latest research.

Core applications of acoustic absorbers and diffusers have not changed much over the decade, but there are exciting developments that have been brought into the new edition. The image above shows how advances in printing graphics onto fabrics enables old-fashioned fabric-wrapped panels to have a modern visual aesthetic. A new section has been added on portable vocal booths. These are now very popular in studios, but there is very little knowledge about how well they perform (not as well as manufacturers would hope is the short answer). A final example would be lighting products that are also acoustic treatments.

Some of the new parts of the book have arisen because we could see applications of treatments that we overlooked in previous editions. There is now a section on automotive absorbents and another on outdoor stage shells. The section on hearing protection devices has been considerably expanded from a cursory mention to something more useful!

It would be impossible to list all the small changes here and there throughout the book. We reviewed the scientific literature from the last ten years and brought every part of the book up-to-date with the latest findings. To give one example, in the last edition we discussed the acoustic properties of activated carbon and how this related to its adsorbing behaviour. Now, we can bring this up-to-date to discuss how double porosity is also key to the excess absorption you get from the material. But the updates are not just about the latest theoretical  investigations, we also bring in the latest applied research, for instance examining the role of diffusers in creating diffuse fields (and whether that is a good thing in performance venues) and showing how the traditional approach to absorbent covering is not necessarily the best.

But the rewrite was not just about adding more material, it was also about removing stuff that was dated or hasn’t found favour in the industry. The discussions in earlier editions about the modelling of treatments in geometric room acoustic models included results from models that no-one uses anymore. These have been removed. Another example would be the section on activated diffusers that has been deleted, because no-one is rushing to make these!

Peter and I hope you enjoy the new edition. The revision was much more work than we expected, but it is great to have an up-to-date version.