Measuring the acoustics of the Bridgewater Hall

We took our year 2 and 3 Acoustics and Audio Engineering students to the Bridgewater Hall, Manchester yesterday. Finished in 1996, the hall is home to three orchestras: the Hallé, the BBC Philharmonic and Manchester Camerata.

Firing a starting pistol to measure a concert hall

When acoustic engineers want to characterise a hall they measure the room impulse response, which is what is picked up on a microphone when a short sharp sound is made. For a big venue you need a loud source, hence why I’m firing a starting pistol. 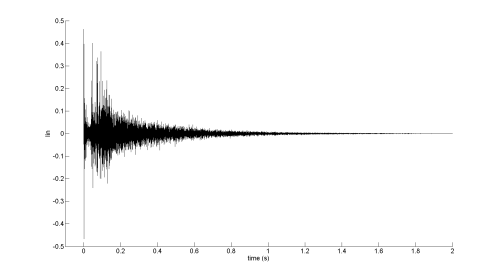 Measured impulse response in the auditorium

This is what an impulse response looks like. The first vertical line (at time=0) is caused by the pistol shot after it has travelled directly from the gun to the microphone in the stalls. Everything else to the right is reflections from the walls, floor and ceiling that arrive later because they have to travel further.

The impulse response captures what the room adds to music played on the stage, It is the starting point for acoustic analysis. One of the key parameters to calculate from the impulse response is the reverberation time. This measures how long sound reverberates around the hall before becoming inaudible. 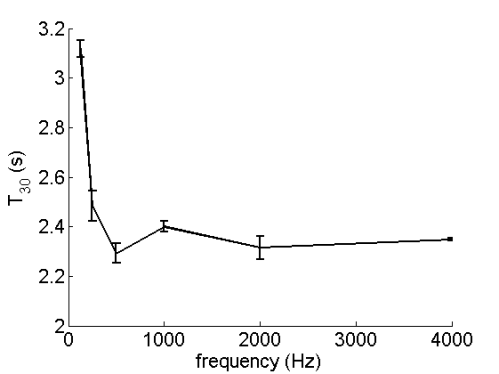 In the empty hall, the reverberation time in the Bridgewater Hall was measured to be about 2.3 seconds for most frequencies. If the reverberation time in an auditorium is too short, then any music would sound dry and insubstantial. If it is too long, then the notes run into each other and become a mush during fast passages of music. A value of just over 2 seconds when the hall is empty, is a typical design value for a good quality concert hall for classical music.

One of the features of the Bridgewater Hall is it has a very powerful bass response. This is reflected in the reverberation time which rises to 3 seconds at low frequency. As an ex-double bass player, I like to hear lots of bass so love this. I have heard others say there is too much bass in the hall. As with types of music, we can have individual tastes for the acoustic properties of concert halls.

Thanks to Rob Harris from Arup Acoustics and the Bridgewater Hall for their help with the visit.

13 responses to “Measuring the acoustics of the Bridgewater Hall”