I recently visited Oslo to talk at the Ultima Contemporary Music Festival. When I was leaving the venue where I had spoken about Sonic Wonderland, someone collared me and said as a Sound Tourist I should go and listen to a particular train station in central Oslo. So the next day I spent an hour making recordings in the hall with the ticket machines at the NationalTheatret Stasjon opposite the American Embassy. 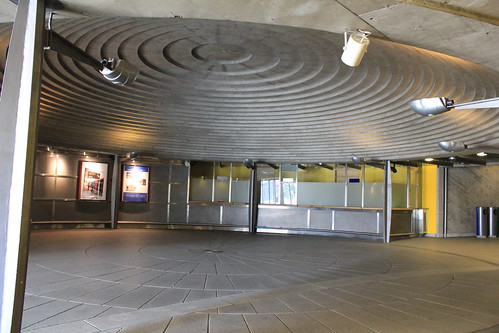 Here is me describing the strange acoustic, and as I walk into the middle of the ticket hall you can hear how my voice takes on a strange warbling. (The end of the audio when I walk out from the centre is, if anything, more dramatic).

When I recorded this piece I didn’t know the full history and my description of the cylinder causing the warble is only part of the story. Stand in the middle of an exact cylinder and talk and you get a flutter echo. All the sound that goes out to the walls in all directions gets focussed by the curve to arrive back at your ears at the same time. The sound then goes out towards the walls again, before getting focussed back to you for a second time. This keeps happening and so after a while a regular pattern of reflections is produced.

The graph below is a measurement on a microphone of a balloon burst showing this happening under an arch in Manchester. When I was in the Oslo station, I assumed this is what was happening to get the warble, but that can’t be the case. If you listen to the audio of me chatting and count the rate of warbling you’ll find there are a little under 5 warbles per second (4.6 to be more exact). Given that the speed of sound in air is 340 metres per second, that means the distance from the centre to the curved walls and back again would have to be (340/4.6) ≈ 74 metres. But the diameter of the booking hall is less than 20 metres, so what is going on? 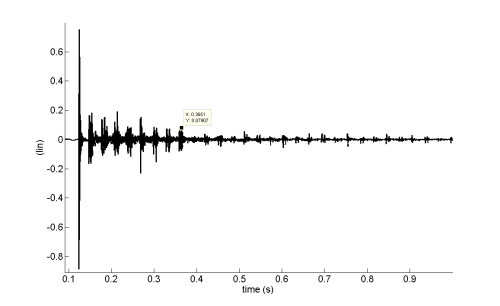 A simple flutter echo from a balloon burst under an arch in Castlefield, Manchester

The architect Arne Eggen kindly sent me an article about the station that includes a plan for the ticket hall. The red lines are added by me to show that the inside space isn’t a simple cylinder because on one side there are a set of rooms. Except for the two entrances, the room is actually two half cylinders of different radii joined together. 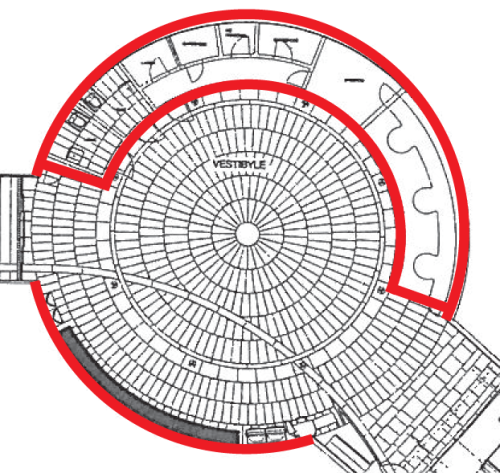 This means that you initially get two focussed reflections that arrive at slightly different times from the top and bottom curve, after about 50 and 60 milliseconds respectively. These reflections then cross over to the other side of the hall to be delayed by 60 and 50 milliseconds respectively, meaning that all sound that has reflected from two surfaces arrive simultaneously after 110 milliseconds. So every third reflection arrives at exactly the same time regardless of which direction it started off. This makes every third reflection louder and this generates the warble.

Here is what a balloon burst sounds like in the station and a graph of what I measured on the microphone: 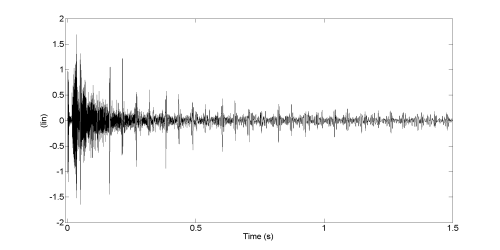 Impulse Response of Sound Sculpture in an Oslo Train Station

110 milliseconds between reflections would mean about 9 warbles per second, whereas, as I noted earlier, there are actually just under 5. So the true story is slightly more complex than just two radii cylinders. To better see the underlying pattern of reflection arrival times, I examined an autocorrelation of the impulse response. Shown below, this shows that every fourth reflection is actually amplified. I wonder if this is caused by the sliding doors that are set back from the biggest curve on the left side of the plan?

The other thing I learnt from the architect, was the story behind this acoustic sculpture. He knew there would be a flutter echo when he built it, but he explained to me that he never expected it to be so strong. Initially the railway company didn’t like the effect and threatened to sue the architect. However, once musicians and others started visiting the remarkable acoustic as a tourist attraction, the train company grew to love it and dropped their legal action. So it wasn’t a deliberate design, despite what is implied by the plaque on the floor that says ‘Akustik Skulptur’ 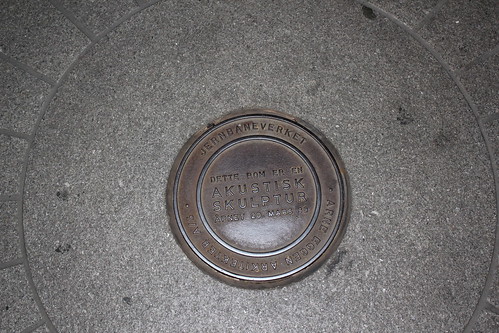 Do you know of any other unusual flutter echoes?

21 responses to “Strange Warblings in a Train Booking Hall”