Architects like to sketch out concepts. A good example is The Mix House, a home where the  surrounding ambient sounds are mixed by the occupants to form a tuned interior soundscape. Inspired by this, I thought I’d sketch out an idea I have been mulling over for a clear anechoic chamber. 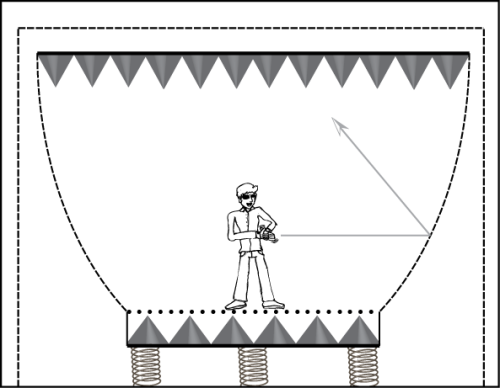 The idea is to take the extreme sensory experience of an anechoic chamber with its claustrophobic silence, and take it to a very busy place like a city square or shopping centre. Plonk the chamber right into the middle so you can watch the crowds passing by while experiencing the silence. Aurally it would be odd like a normal anechoic chamber, but being able to see outside would be less oppressive.

How to make one

The construction needed to make a very quiet space is relatively straightforward because it is just an extension of how sound is normally controlled in buildings. Thick glass walls with very large air gaps would be needed to block the sound passing through the walls. Like a concert hall or recording studio it would need to be mounted on springs, so it would be isolated from vibration travelling through the ground.

The more tricky bit is getting the sound absorbed by the clear walls. The completely “dead” sound this creates is an important attribute of an anechoic chamber. Normal acoustic absorbers are not transparent, however, in recent years clear absorbers have become increasingly popular. (They’re a bit like the perforated bags that fresh bread used to be sold in.) These absorbers aren’t as effective as conventional opaque designs, which is why the walls of my concept are curved like a goldfish bowl. The idea is that any remaining reflections are directed upwards away from the visitor to be absorbed by more conventional absorbing wedges in the ceiling.

Now all I need to do is convince someone to give me a lot of money to try and build one.

8 responses to “A clear anechoic chamber”